No! I'm not pregnant! Sam and I have 14 weeks today until the wedding. Eeeek!

I can't believe how quickly the time has passed since we got engaged last July (at my 21st birthday). It was one of the most memorable nights our lives. 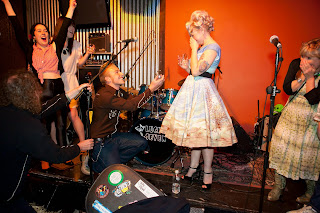 I love my sister with her hands in the air, and my mum in shock! 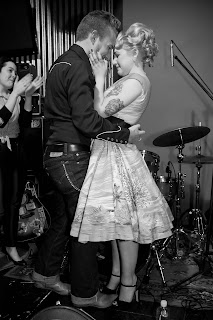 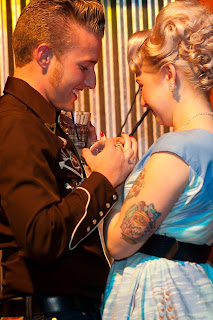 I was worried he was going it put the ring on the wrong finger! 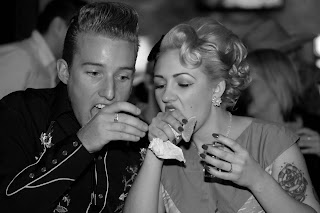 T-t-tequila!
The bar manager said we sould have any champagne we liked, but we went for Tequila Slammers instead!

There is so much planning to do for a wedding, and ours is going to be fairly low key! We have all of our "big" things booked, now it is down to the minor details, which I think are the most important part. There are so many ideas and insparations out there it is hard to know where to start. We are just going with the flow and I'm sure everything will work out just fine....saying that I have already had a few nightmares about nothing being done and waking up a little stressed out!

I have discovered a great website, Ruffled. Amazing, inspiring weddings! Even if you aren't getting married, I suggest you still have a look at this site any way. So pretty!

So, ladies, if you have any suggestions or advice for this bride-to-be, what would you say?

Email ThisBlogThis!Share to TwitterShare to FacebookShare to Pinterest
Labels: Wedding

This is the first of many posts I will be doing in the future to feature some of my favourite bands. First up is Rusty & the Dragstrip Trio

We have some amazing bands in Australia, and one of my favouites...actually make that my absolute favourite is Rusty & the Dragstrip Trio. A friend gave Sam a copy of one of their albums about 5 years ago...I can listen to both of their cd's back to back and not get sick of it. If you haven't heard them before, here is a clip of them playing at their local (Mustang Bar) for your viewing pleasure....

Forming in Perth, Western Australia, in 2001, this four piece rockabilly outfit geared itself towards a traditional 50s look and sound. With energetic live performances Rusty and the boys never fail to deliver the goods. You'll surely be boppin' and a-hollerin' for more.

These cats will take you back to the cool and dangerous sounds of the 1950s, playing songs from the vaults of the Sun Studio with early Elvis, to those rockabilly obscurities that you can't hear anywhere else. They will also pull back with spooky ballads and real gone blues. But this is not just a 50s cover band...

Rusty & the Dragstrip Trio have no shortage of originals, as proven on their debut album "Playing for you" recorded live at The Satellite Studio, Perth, W.A., and their second release, "I ain't ready" recorded live at Revolver Sound Studio, Perth, W.A., released on the "Wild Records" label, Hollywood, C.A. Due to popular world-wide demand, both CDs have been re-released in Australia, USA, and Europe. If you don’t have one ...get one and see what all the fuss is about!

Over the years, Rusty & the Dragstrip Trio have played at many incredible places across the world. Locally, The Mustang bar in Perth had Rusty and the boys playing every week from 2001 to 2007. The international Viva Las Vegas Rockabilly Festival hosted the band on their main stage, twice (both times the band received raving reviews). In Las Angeles at many Wild Record Shows in L.A., the boys played alongside other great rockabilly acts. Back in Australia, the Wintersun Festival has hosted the boys a number of times, and Melbourne has also seen the Dragstrip Trio. They have done festivals all around their home town as well as played in many local bars and clubs.

They have had the pleasure of supporting Chris Isaak twice. Chris accidentally discovered the Dragstrip Trio when he walked past The Mustang Bar where they were playing at the time. He jumped on stage, jammed with the band, and invited Rusty to sing with him and his band at the Burswood Casino.

In 2007 the Dragstrip Trio took a break."
Rusty has now formed a new group- Rusty Pinto Combo. Their sound is a little different to that of the Drag Strip Trio, with more of a 40's blues influence, but still raw with high energy just the same. There is a split coming out this month, Press-Tone Rockabilly Vol. 4 with Rusty Pinto and Pat Capocci, which I can not wait to get my mitts on!
Lonesome- Rusty Pinto Combo
I am yet to see Rusty play, so I might just be (hopefully) making my way over to the Camperdown Cruise in Victoria to finally see him live!﻿
x Molly
Posted by Mrs Molly Doll at 1:16 PM 2 comments:

Even though it is only Autumn here, we are already starting to feel the winter chill. I am in need of a few new winter friendly clothing items, so here are a few that are on my "lust list" 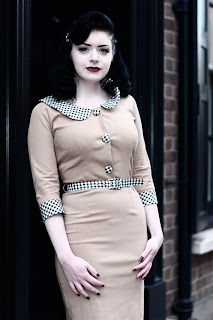 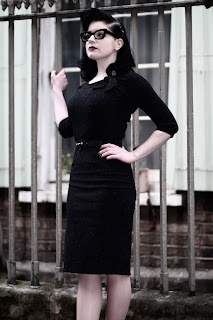 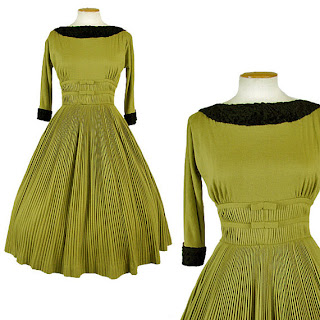 Hot Couture on a cold day

Yesterday I had the most amazing oppertunity to work with some very talented people! The lovely Joy from Hot Couture asked me if I would like to do some work for her on her next shoot. Well of course I said yes, what a great experince for a young hairdresser! We had some very talented people to work with- in front of the lense would be the sweetest, funny and gorgeous ladies, Ginger (Joys daughter) and Libbie Jean, and behind the scene and lense was Harmony Nicholas. That girl is talented! My friend Evie was on lippie patrol and did the best job on the girls' makeup! This was both mine and Evie's first time being the main players on a fashion shoot so it was an exciting (and nerve wrecking!) day for us, but it was a whole lotta fun!
The guys at Louis Bond were just fantastic, letting us move their furnature and pretty much turn their shop upside down! Attached to the shop was a great cafe with yummy food and a cute courtyard. If you are in Adelaide, pop in and have a coffee and some lunch- and tell them the Hot Couture girls sent you!

I didn't bring my camera so I've got some photos from Joy's facebook page... 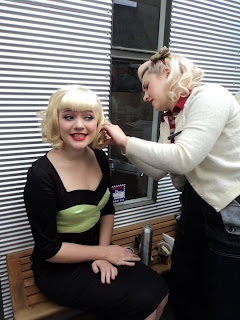 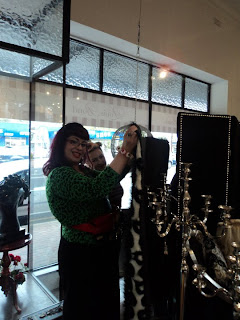 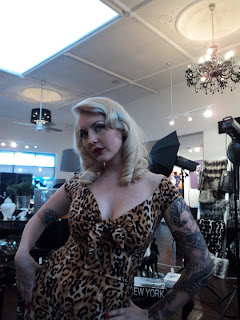 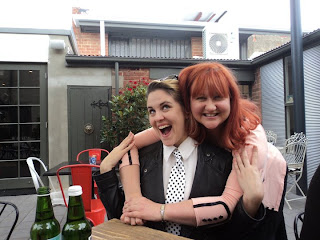 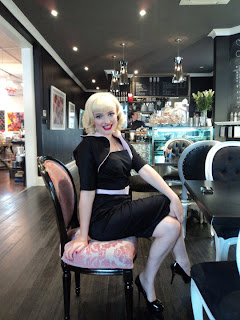 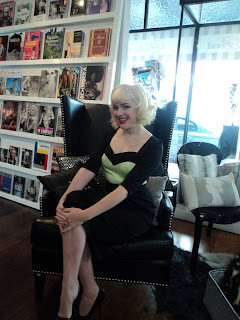 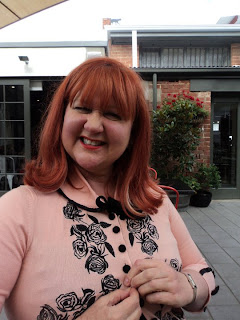 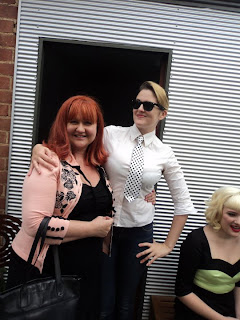 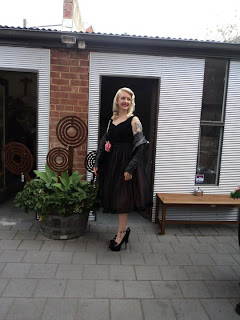 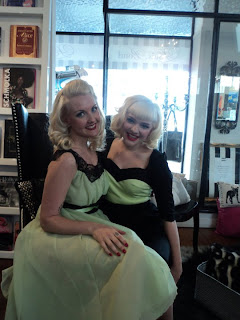 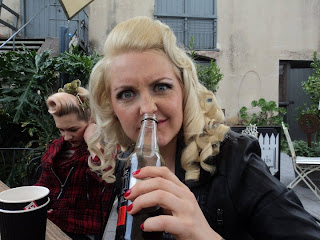 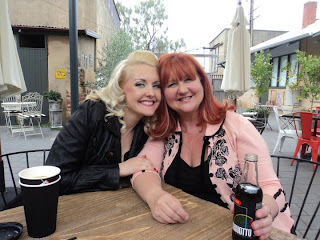 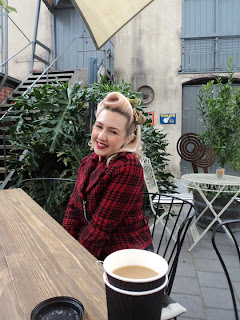 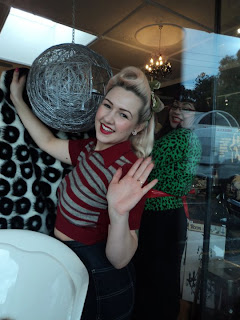 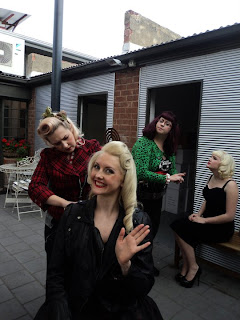 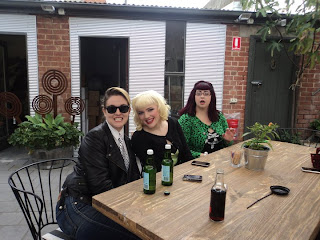 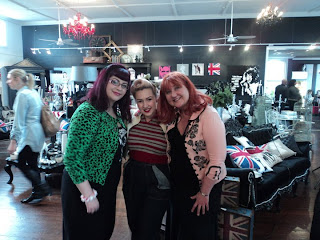 Keep and eye out for the ad in DEADBEAT Magazine!

Thanks again Joy for giving me this oppertunity, I can not wait to see the final results! 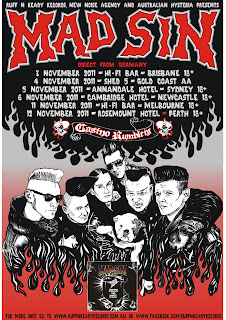 OH YEAH! I got Sam and I tickets to see MAD SIN!!! I am soooooo excited about this! They are one of my favourite bands. A few years back they were booked to come to Australia but the tour got cancelled for some reason, so even though they aren't coming to our city, we will be off to see them in Melbourne in November! YAAAAAY!!!